Anthony Nicholas Brady- “One of the Wealthiest Men in the World”

Posted on May 2, 2020 by Jennifer Mele under Historic St. Agnes Cemetery, History, Stories of our Dearly Departed
Leave a comment

“Everything Anthony Nicholas Brady touched turned to gold.  In his lifetime he amassed such a fortune he was known as one of the wealthiest men in the world and perhaps the wealthiest in New York State.  His enormous private mausoleum designed in the style of the Greek Parthenon, is proof he had a lot of money to spend.  Today it is valued at nearly 4 million dollars. 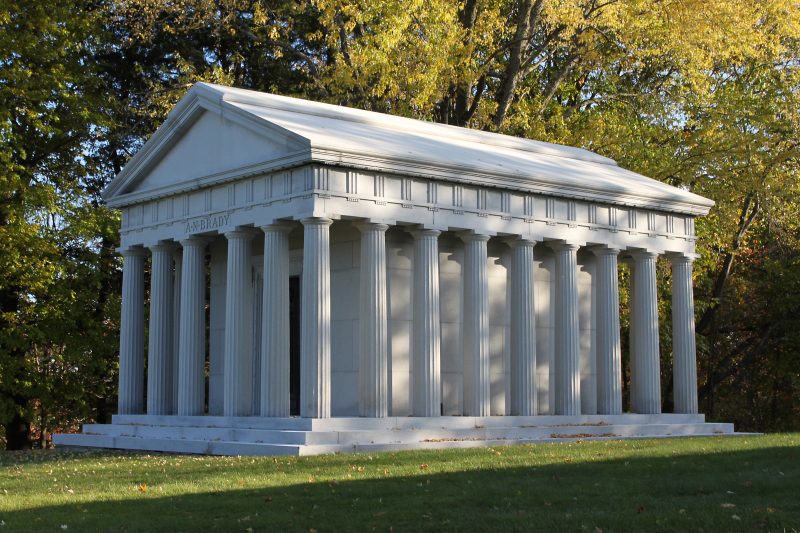 View our video on Anthony Nicholas Brady and the Brady private mausoleum.

He is described as a shrewd and brilliant business man being one of the first to capitalize on a “new”  thing called electricity having locked in a contract in 1881 to light the streets of Albany. (He seemed to be ahead of every cutting edge modern invention.)  His business dealings are summarized in the news article titled Brady, the Gas King – In Control of Scores of Millions, Anthony N. Brady is the New Sun of Wall Street.  He was a generous man and well known for his philanthropy to this date.  He founded the Brady Maternity Hospital in Albany because of his deep concern for the well-being of mothers and babies.  His hospital opened two years after his death and served hundreds of thousands of families until it closed in 1966.  Brady died on July 23, 1913 at age 71 of an acute gastric attack while in London.  It is said at the time of his death he was still grief-stricken by the death of his daughter Flora who was killed with three daughters of Andrew Hamilton when the train car they were riding in derailed and crashing into the engine burning them alive.  Flora Brady Gavit is the first to be entombed the large family mausoleum.

The Anthony Nicholas Brady Mausoleum is a work of art done in the style of Iktinos and Kallikrates’ Parthenon, the Temple of Athena, Athens, Greece, 447-438 B.C.  Like the ancient Parthenon, this mausoleum is perfectly balanced mathematically.  The harmonious design and the mathematical precision of the elements create the illusion of perfection.  This is a peristyle building meaning columns are on all four sides.  The columns convex (are thicker) in the middle so the eye does not see them as concave.

The Parthenon sits high upon the Acropolis and likewise the Brady mausoleum is elevated, commanding space that today is worth nearly three quarters of a million dollars for the lot alone.  Brady owned the granite quarry where the stone came from to build this massive structure.  When he died in 1913, his estimated net worth was $100 million dollars making him one of the wealthiest men in the country.”  – Kelly Grimaldi 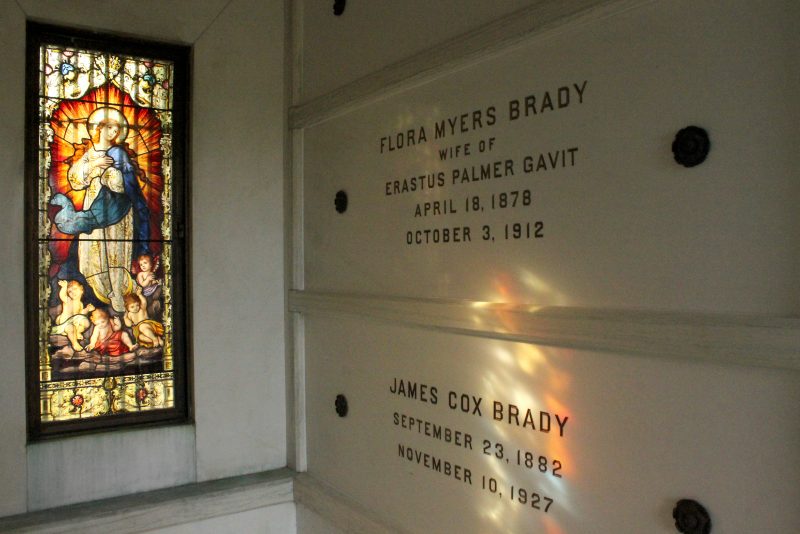 Anthony Nicholas Brady and the Brady mausoleum is also one of many stories featured in our beautiful 160 page coffee table book “These Sacred Grounds: 150 Years of St. Agnes Cemetery” by Historian and Author Kelly Grimaldi, and is now on sale for only $35.  Click here for book information.