When the Chicago Cubs won the World Series in 2016, I had no idea how that would impact St. Mary’s Cemetery located in Troy, New York.  But boy did it!

The last time the Cubs won the World Series was in 1908 and on the team was Troy native Johnny Evers, second baseman.  Described as a slight man (he was 5 foot 9 and only weighed 125 pounds), Evers was not built to drive home runs but that in no way diminished his worth to his team and the game of baseball in general.  His accomplishments are well documented on the internet for anyone interested in the details of his career, so I won’t recap them here except to paraphrase the Baseball Hall of Fame on a few key points:

Johnny Evers was a scrappy, acrobatic player with a vast knowledge of the game he loved to play.  His knowledge and determined style of play lead his teams to five National League  pennants and three World Series titles in the first years of the 20th century.  Born in Troy, NY in July of 1881, Evers made his big-league debut at the age of 21 in 1902 with the Chicago Cubs.  He retired in 1918 having batted .300 or higher twice in his career, stole 324 bases and scored 919  runs.  His scrappy personality often led him to argue with umpires resulting in numerous suspensions.  His combative playing style and sharp tongue with the umpires earned him the nickname “The Human Crab”. 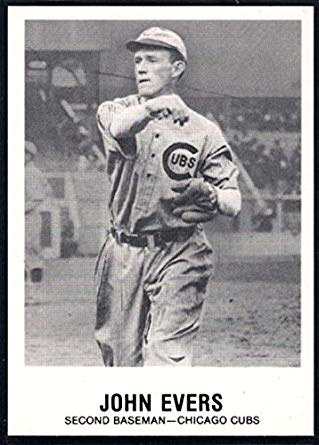 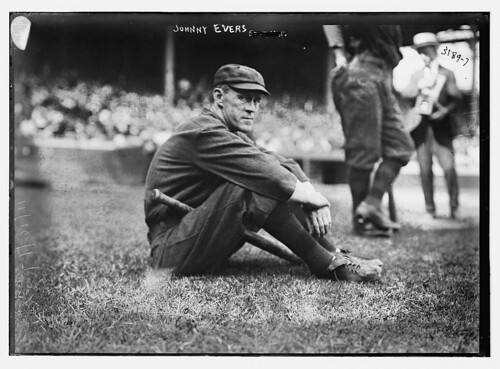 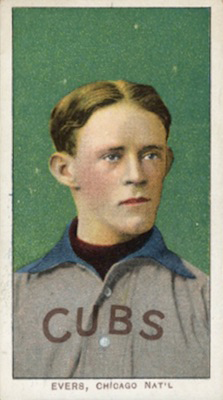 As his plaque at the Baseball Hall of Fame states “John Joseph Evers  – The Trojan – Middle-Man of the famous double play combination of Tinker to Evers to Chance…” Johnny Evers is a legend in baseball and in Troy NY, and he has not been forgotten.

Hundreds of visitors visited his gravestone located in Section C in St. Mary’s Cemetery that year to share their excitement and pay their respects in a show of love and respect for a man who dedicated his life to the game he played so well.

John was also a devoted family man.  He and his wife Helen Fitzgibbons were married in 1909 and a son, John Evers, Jr. was born a year later.  Tragically, their daughter, Helen, born in 1911, died of scarlet fever at the age of three years in 1914.  One would think given his illustrious baseball career, the Evers Family lived a comfortable life after John’s retirement in 1918 (the year of the Spanish Flu Epidemic), but that was not entirely true.  By 1936, John Evers was in bankruptcy after the sporting goods store he opened in Albany in 1923 fell into financial trouble.  Likely the Great Depression of the early 1930s played a part in his struggle to make a living.  He did not lose the store, however; it was passed down to his descendants.

In 1942 Evers suffered a stoke that caused paralysis of his entire right side.  He spent the last five years of his life bed-ridden or in a wheelchair until a cerebral hemorrhage caused his death on March 28th, 1947 at the age of 65. It is sad to think of this once scrappy, vibrant baseball player unable to do the basic things in life that we all take for granted. His wife lived another 27 years before dying at age 85 in Childs Nursing Home.

I am glad to know Johnny Evers is not forgotten as he rests in peace with his parents, wife, and young daughter in beautiful St. Mary’s Cemetery.    Rest in peace Johnny.       – By Kelly Grimaldi 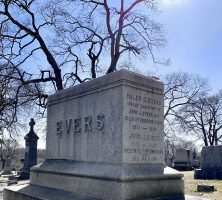 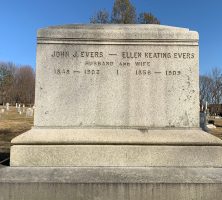 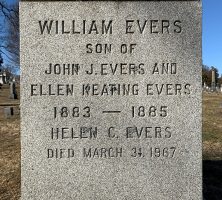 William and Helen Evers- side of the Evers gravestone, St. Mary’s Troy, NY