Posted on January 20, 2020 by Jennifer Mele under All Cemeteries, Genealogy, Preservation, Uncategorized, Veterans and Military
Leave a comment

Seven years ago, marked the introduction of what we dub the “Cemetery Enthusiast Volunteer Program” at Albany Diocesan Cemeteries. In this time, we have been blessed with a great many good souls who cheerfully tackle a myriad of tasks related to the restoration of monuments and the preservation of cemetery records – many of which (the monuments & documents, not the volunteers) are 150 years old or older!  Few things say love and commitment to a cause than offering hours of time engaged in manual labor without compensation of any kind.

Initially focused in Historic St. Agnes Cemetery, our Volunteer Program has successfully expanded to include several more cemeteries including St. Mary’s in Troy, St. Patrick’s in Watervliet and St. Patrick’s in Ravena.

In these cemeteries, volunteers have made significant contributions to the documentation and mapping of the older sections and to the overall beautification of the grounds. Many more volunteers work remotely through the highly respected Troy Irish Genealogy Society to transcribe and digitize the interment records for our oldest cemeteries and make them available to the public via their website.

Our volunteers range in age and experience; from families to school or community groups, businesses looking for a volunteer project, from teens to retired people all of whom share a common interest and dedication to community service activities.  We are truly blessed to witness their determination to give of their time to make our cemeteries better places for our many visitors. 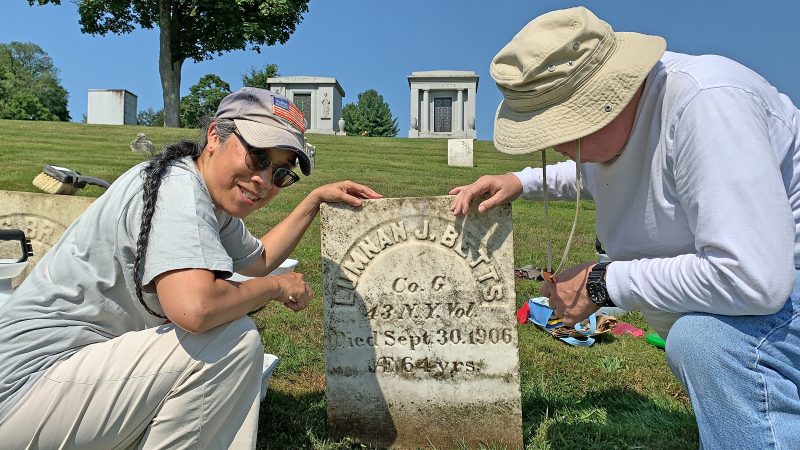 Three volunteers have been with the program since its inception and every year their good work is found all over Historic St. Agnes Cemetery, Menands, New York, where they chose to concentrate their efforts. Abbie Jackson currently works as a teaching assistant after having retired in 2016 as commander from the United States Navy.  Don Burkett retired in 2001 from the New York State Library.  He also served in the United States Air Force and was discharged as Staff Sergeant in 1972.  Abbie and Don met in a ballroom dancing class where they became dance partners.  They found they shared many common interests and among them is an appreciation for old cemeteries.  In 2012 they came to St. Agnes Cemetery for a tour led by historian, Kelly Grimaldi. During the tour, Kelly talked about her project to identify, repair and restore veterans’ gravestones located everywhere within the Cemetery’s 114 acres. Being veterans themselves, Don and Abbie volunteered for the project. They took a seminar in gravestone repair and restoration led by Joe Ferrannini of Grave Stone Matters and since then, they have cleaned over 100 stones marking the graves of veterans from the Civil War to World War II.

Don and Abbie say they both feel a deep sense of accomplishment knowing they left something better than they found it.

When visitors drive around St. Agnes Cemetery and see the gleaming white gravestones for long departed soldiers and sailors, it sends the message that they are not forgotten.  Don and Abbie strongly feel they owe our veterans a debt of gratitude for all time. Cleaning their gravestones is their way of honoring the memory of our country’s heroes.

Bob Kowalczyk has also been working as a volunteer for the past seven years. His interest in cemetery restoration has led him to accomplish many very complex repairs. Most recently he helped restore a five-foot-tall angel after it was knocked to the ground during a severe summer storm in 2018.  The angel’s arm was broken off into four pieces. Bob designed a wooden brace to support the marble arm while the epoxy hardened. A few years ago, he designed a system to support a small marble angel marking the grave of a little girl who died in 1904. The figure was broken in several places and was a complicated repair but that did not deter Bob from piecing it back together and resetting it on a new foundation. The same is true of his work on a marble tablet stone erected in 1848 for a young mother and her newborn baby girl. The stone had to be excavated and freed from an earlier attempt to repair it with metal braces. A new base was built, and the gravestone was pieced back together with epoxy and gaps were filled in with a special type of mortar appropriate for use on marble. 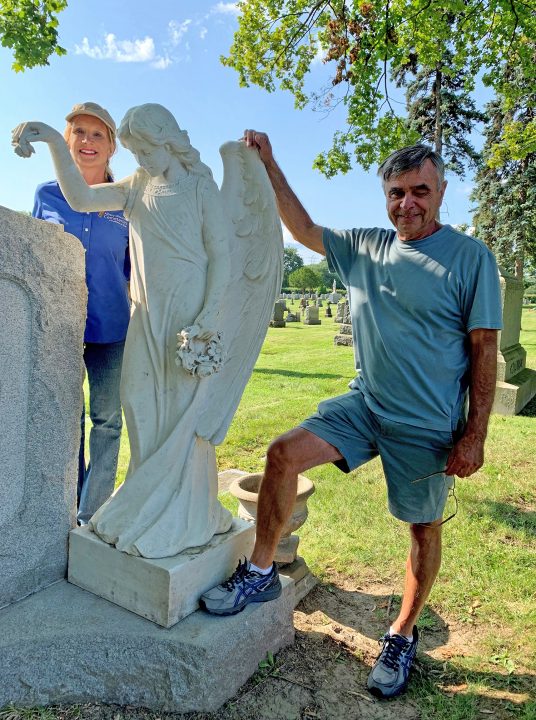 Bob and Kelly Grimaldi with the beautifully repaired angel.

Like Don and Abbie, Bob feels a sense of accomplishment when he succeeds in restoring and preserving gravestones that are well over 100 years old.

The heart of a volunteer is big and generous and we at Albany Diocesan Cemeteries feel so fortunate to have Abbie, Bob, Don and dozens of dedicated, talented volunteers working with us on a regular basis.

Anyone interested in joining the Cemetery Enthusiast Volunteer Program or starting their own should contact Kelly Grimaldi, [email protected] or (518) 350-7679.