Historic St. Agnes Cemetery is the final resting place for approximately 527 Civil War Veterans interred in its sacred ground. It is our mission to preserve the memory of each soldier who, with patriotism and determination, participated in a struggle to hold our country together as one Nation under God. Our Civil War soldiers deserve to be remembered for all time for it is they who paved the way for a stronger, more enlightened democracy under a united Republic. We must never forget who these men were as individuals.  In many cases, the only reminder we have of their great sacrifice is a gravestone indicating the regiment and company in which they served.  Therefore, we have a moral obligation to honor our long departed soldiers by memorializing them properly and respectfully for all time.

The Civil War Veterans Memorial Restoration Project (hereafter called the project), was the brainchild of Rick Touchette, Executive Director of Albany Diocesan Cemeteries.  When I came on board as historian for Albany Diocesan Cemeteries, I could appreciate the efforts that had been done, but I also saw the project in a much broader context and thus began to take it to the next level – and the next – and the next.  It grew wings because of the enthusiasm it generated in the community and among people, who like me, love old cemeteries and have immense respect for veterans of all branches, ranks and eras.

I began walking St. Agnes Cemetery’s 114 acres of rolling hills and winding roads in search of Civil War graves.   Each section is completely different.  In the oldest sections where the gravestones for Civil War veterans are located, we find many stones covered in mold, lichen and pollutants making them nearly impossible to read.  Many more stones were sunk deep into the ground and needed to be dug out in order to read them, and even worse – many were broken and laying face down.  Section by section and row by row I walked with eyes on the ground and clipboard and camera in hand documenting the inscription and photographing the stones.  I also did a condition assessment of each stone and put all the information into a database.   That was part one of the project and it took until mid-summer of 2010 to complete. 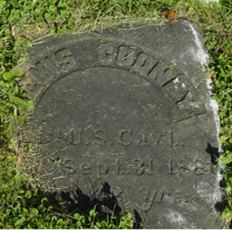 Part two of the project began in early fall with a reset and cleaning of stones that were upright but had sunk in the ground.  By now the project had enough publicity to garner the support of a handful of volunteers eager to help.  Together we dug out stones and reset them; we pieced the broken ones back together with special epoxy and mortar safe for use on marble, and then we cleaned them all.  A total of 527 Civil War veterans’ gravestones were identified. Most of them to date have been restored or replaced.  The ones we cannot read at all are lost to us forever.  There are also a few dozen soldiers and sailors that need replacement stones but without military service records, we cannot make an application to the Department of Veterans Affairs for a new headstone.  We have been very successful in procuring gravestones for those veterans who lay in unmarked graves since their deaths over 100 years ago.  To date of 110 new gravestones have been installed.

How did we pay for all of this wonderful restoration work?  Our Civil War Veterans Memorial Restoration Project received grant money from the Bender Family Foundation and from the Daughters of the American Revolution and we used that money to purchase restoration materials needed to fix and clean the stones.  We also kicked off our Adopt a Veteran campaign early on in the project and the response from the community was awe-inspiring.  People chose a veteran from our database, paid $100 to St. Agnes Cemetery and for that we completely restored (and sometimes replaced) the gravestone for a soldier who served his country in the Civil War.  The project became very well known and respected in the community.  Twelve years later and many hundreds of successful restorations, we are still going strong in several of our other cemeteries such as Calvary in Glenmont, St. Patrick’s in Watervliet and St. Mary’s Cemetery in Troy.  We must never forget our veterans!

Barney Ross was only 12 years old when he joined the 3rd infantry of the New York Volunteer Army.   He served the entire four years.  Barney died in 1896 at the age of 36.  His original gravestone was illegible and was replaced as part of our project. View our Graveside Chat of Barney Ross.