On January 18, 1849 three young wives, two with many children and one a newlywed, received the terrible news that their husbands had perished in a senseless and preventable accident at their workplace.  The shock must have cut to their core.

Each year for the past five years a dedicated and talented volunteer, Bob Kowalczyk and I look for a long forgotten and badly damaged gravestones in St. Agnes Cemetery, Menands, and target one for restoration.  The process is often long and involved, but the result is well worth the effort.  The stone we chose this year marks the grave of a man named Peter Halpen as it is inscribed (also spelled Halpin elsewhere) and he died on January 18, 1849.  His death pre-dated the founding of St. Agnes Cemetery by 18 years, so Bob and I knew he was removed from another cemetery.  While repairing the stone, our thoughts were not on who exactly Peter Halpen was but rather on how we could preserve his 171 year old gravestone.  It was not until the final repair was made by me on a quiet and refreshing September morning that I started to really wonder how and why this young man (his stone says he was 30 years old) died.  While carefully filling in the cracks with Lithomex where we had to epoxy together the broken marble tablet style gravestone, I brought my face very close to the words inscribed.

A native of Ireland town of Bailiboro 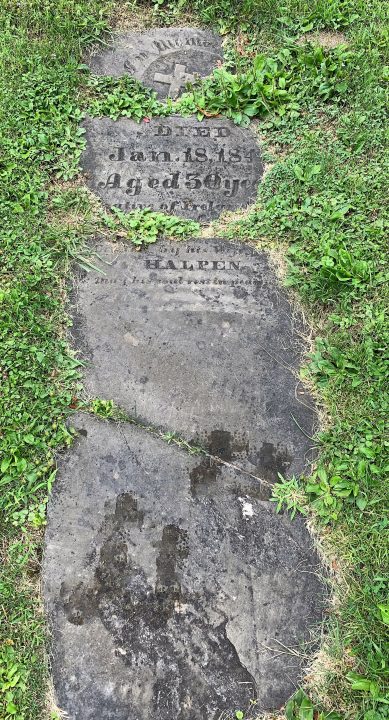 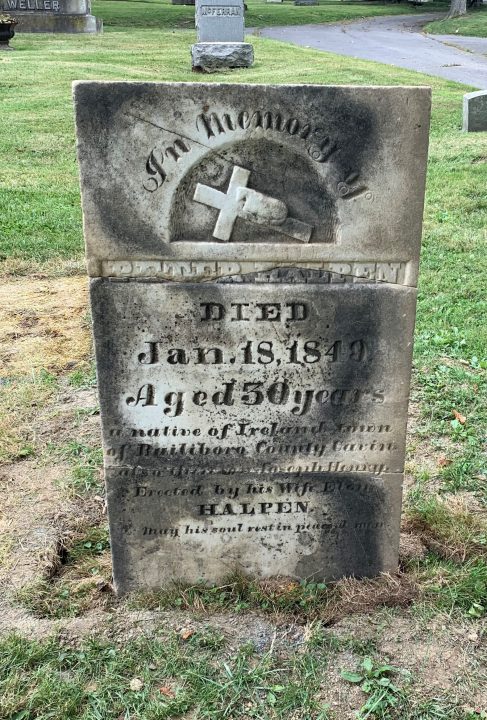 I got the strange sensation that it was my duty to tell his story.

I did some research and found his story is a tragic one to be sure. Peter’s story revealed he was killed while preforming his job.  The newspaper article transcribed below says it all.

“Yesterday afternoon an occurrence of a truly distressing nature, and which was fatal to three persons, happened at the works of Albany Gas Company on Arch Street [Albany, New York].  The recent cold weather had, it supposed, worked some injury to the main pipes conveying gas to the large meter, hindering a free flow of gas for consumption.  The superintendent, Mr. Ludlow, directed two of the men in employ of the Company to descend the dry well and tap the pipes by which the gas is discharged from the meter, cautioning them, however, not to do so unless they were prepared with plugs to stop the hole they might make in the pipe.  The men, Michael Flood and Peter Halpin, who had long been in the service of the Company, and well understood their duties, act about the job.  Flood descended first, and when he had got to the bottom of he well, found he had no plug to stop the hole he was to drill into the pipe.  Halpin went up for it and it is supposed while he was absent, Flood drilled the hole and the gas escaping overcame him immediately.  Halpin, returning to the well with the plug, was also immediately overpowered as it is supposed.  No one was in the immediate vicinity of the accident.  At last some of the workmen, alarmed at their protracted absence, lowered Patrick Coyle into the well, having previously tied a rope around his body to haul him out if he considered himself in danger.  Coyle had not been lowered for long before he appeared to be overcome by the escaping gas, and before he could be released, he was beyond all hope of recovery, and lived but a few minutes after he was drawn out.  The body of Flood was next recovered, but not until it was drawn up by the grappling irons used by Daniel Lu-Combe to recover property lost on the river.  The body of Halpin could not be reached, even with the aid of the grappling.  Such a brief outline of this melancholy event; the details will be disclosed at the coroner’s inquest, which is to sit today, and may change the complexion of our accounts but not, we believe, materially.  Flood has been married only a short time but Halpin and Coyle leave behind large families to bewail their sudden bereavement.  The occurrence as may be supposed, created great excitement in the neighborhood, and crowds gathered around the scene of this melancholy disaster. “

All three men, Michael Flood, Peter Halpin and Patrick Coyle were interred in a gave lot donated by St. John’s Cemetery that used to be located on Delaware Avenue in Albany.  Information on the cemetery and the transcribed burial records is found here: https://troyirish.org/genealogy-records/cemetery-records/st-johns-albany

The newspaper story was fairly accurate except for a few key details that were revealed in Coroner Osborn’s report.  A paraphrase of the report is provided as follows:

Peter Halpin did not go down the well with Flood at first.  It was a man named Smith who reported he immediately followed Flood and upon reaching the spot, he found Flood sitting on a pail drilling a hole in the under side of the pipe.  Smith went to Flood’s assistance and said, “When you get  the hole through the pipe, how will you stop it?”  To which Flood replied, “The only difficulty is to get the hole made.  I can soon stop it.”  He further remarked to this person, that when he saw the gas coming, he must blow out the light.   Smith did so when Flood directed him to go up and tell Peter Halpin to come to his assistance with a plug.  Halpin immediately commenced a search for a plug but before going down he called out to Flood several times but received no answer.  He descended some distance further, when he call again with like result.  Some time having elapsed since Halpin left, nothing being heard from either persons who were down in the well, the workman became alarmed.  Patrick Coyle offered to make a search.  A rope was tied around his body in order to pull him out.  Attempts to pull him out were unsuccessful because Coyle passed out from the gas exposure and became tangled in the cross pipes.  When Coyle was freed from the pipes and brought up he still had some signs of life but died within a short time before medical attendance could be procured.

As stated in the coroner’s report, the death of these three men is alone attributed to the carelessness of Michael Flood in not taking the proper tools with him on the onset.  Had he taken the plug with him, the men would not be dead.  This well is 35 feet deep and it is where all the pipes by which the city is supplied with gas branch off from the main pipe.  The verdict of the coroner was “Death from inhaling gas into the lungs.”

Call for Research!  Can you help answer some questions?

Peter Halpin’s gravestone says he was 30 years old at time of death but his interment record says he was 39 years old and the newspapers say 35 years old.  His wife, Ellen was 69 years old when she died in 1888 which puts her date of birth in the year 1819.  Neither Peter or Ellen appear in census data.  Nothing more is known of Ellen except that she died of old age as is noted on her interment card and is buried in a double grave in a lot owned by Richard M. Johnson.  When she was interred on May 29, 1888, the bodies of her husband, Peter, James H. Halpen and Catharine Huthinson were also interred on that date.  Ellen was still using her married name at time of death indicating she never remarried.  Who were the children of Peter and Ellen?  What became of Ellen after Peter died?  Her relationship to the lot owner Richard M. Johnson, may be mother-in-law, but we need confirmation of that.