Eva Layton – Rescued by the Grace of God one Fateful Day in St. Agnes Cemetery

In January, 2019, Albany Diocesan Cemeteries launched “Stories of our Dearly Departed”, a series featuring stories and photographs of those who are buried within our 19 upstate NY cemeteries.

“The water rushed into her throat and nose as the weight of her bathing skirt pulled her towards the bottom of the pond.  Her hands grasped frantically at the make-shift wooden raft she and three of her friends were floating on just a minute before it tipped over.  She undoubtably heard the screams from the shoreline and the frantic cries for help.  In another minute her lungs would fill up and she would die.  But by the grace of God she didn’t die that hot, late summer afternoon.  She would not join her three friends on the assent to Heaven.  A groundskeeper responded to the cries for help and dove into the deep pond and grabbed 16-year-old Eva Layton by her limp wrist and pulled her to shore.  Algae clung to her thin body tinged blue from lack of oxygen.   She coughed and sputtered water until at last her lungs could take in air.   She was saved.  Fernwood Pond did not give up the bodies of Eva’s three friends easily.  The water was 17 feet deep and as black as night.  It would be several hours before they surfaced much to the horror of all those weeping over their demise on the shoreline.   The newspaper account of the incident is vividly detailed sparing none of the horrors of that afternoon.  The reader is moved to tears.

September 5, 1903 was unusually hot for a late summer day.  It was the perfect day for a swim in Fernwood Pond located on the grounds of St. Agnes Cemetery, Menands.  It should have been an idyllic day of fun and frolic for a group of orphan girls and young women accompanied by the Sisters of Charity from St. Joseph’s Industrial School.  Instead it was a day burned into their minds by a tragedy that has, to this day, not been forgotten. 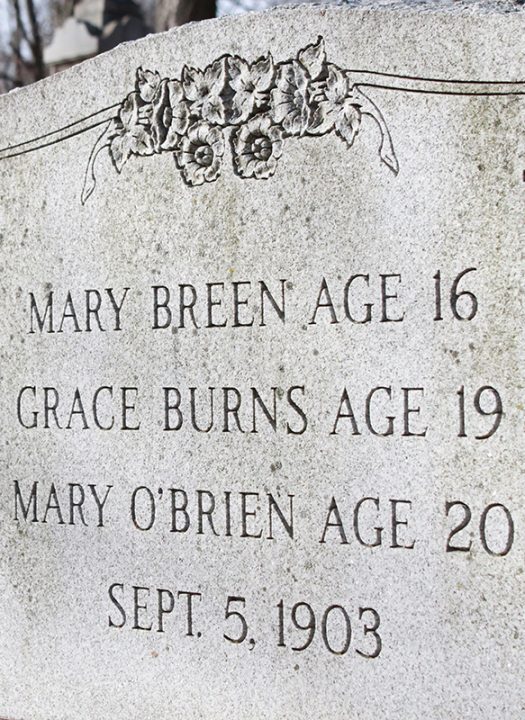 Eva’s life was rough right from the start.  By the age of five, she and her two sisters were placed in St. Vincent’s Orphan Asylum where they would each remain until they reached the age of 16.   After their discharge from the orphanage we lose Ellen and Jessie but find Eva in the St. Joseph’s Industrial School run by the Daughters of Charity.  The school prepped young women for work.  Sometimes, as in the case of the Layton sisters, an orphanage is a better alternative to living home.

Ellen Layton, the girls’ mother was an angry, mentally unstable woman with a penchant for drinking and  physical violence.  Thomas, their father, appears to have been more even tempered but he was blind and crippled by Rheumatoid Arthritis at a time when nothing could be done to treat auto-immune disease.  Ellen was 18 years old –  22 years younger than Thomas – when they married in April of 1884.  The birth of their first daughter suggests Ellen was with child on her wedding day.   We have no way of proving the child was 40-year-old Civil War veteran, Thomas Layton’s baby or if he married her to save her reputation.   Eva, the middle daughter came along in 1887 and Jessie, the youngest girl was born in 1890.

Albany in the 1880s was a thriving industrial city teeming with immigrants working in factories, lumber yards, foundries and on the railroad and canal.  There was a honest day’s wage to be earned but Thomas  could not work due to his disabilities and Ellen was too unstable to hold a job.  The family lived off Thomas’s small pension from his service in the Civil War and alms from the Catholic Church.  We first learn of the family through a newspaper article printed in early 1892 titled:  The Layton-Merrill Assault Case to Be Further Examined summarized as follows:

Mrs. Ellen Layton of No. 5 Catherine Street is charged with assault in the second degree.  Wesley Merrill, an old man living in the same house, was beaten severely by Mrs. Layton wielding a pail.  Layton claims it was in self-defense, stating Merrill struck her first in the back of the neck with a cuspidor.  She attempted to protect herself by swinging the pail at the head of the elderly man hitting him repeatedly.  Mrs. Layton’s sisters accompanied her to court and corroborated her story.  The magistrate advised both sides to seek council as this was a most serious charge.  Mrs. Layton was confined to the women’s jail with bail being fixed at $500.

Ellen Layton was sentenced to 6 months in prison and served the full term.  It was not long after her release that we find her name linked with scandal in a newspaper article dated August 10, 1892 titled: THE LAYTON ASSAULT – Sad Story of domestic Infelicity – the Husband Blind and Crippled.  This piece is long and detailed giving us a rare glimpse into the lives of an otherwise obscure family in Albany’s history.  Ellen assaulted Thomas with a crutch.  Thomas, who has but one leg and is blind, was led into court by his sister.   He swore his wife had pounded him upon the head with a crutch and would have knocked his brains out but for the intervention of his sister.  Tears ran down his face as he related his story.

“Judge,” he continued in faltering tones, “that woman is bound to disgrace me and our little ones.  She persists in running around with men and is intoxicated half her time.  The children are sadly neglected, and when I provide groceries for the house there is no one to cook the victuals.”

Ellen claimed Thomas pulled a knife on her and attempted to stab her.

“All lies Judge,” asserted Layton, solemnly shaking his head, and then he laid a piece of paper upon the desk, saying that it was a certificate of his wife’s character and what the neighbors thought about her.

The judge read the certificate to the court:  This certifies that Mrs. Layton, the wife of Thomas Layton, is a quarrelsome and disagreeable woman.”  He told Mr. Layton the signed certificate was a novel and practical idea and asked if there was any way of settling this domestic matter.

Layton said, “Only by sending the woman here to the reformatory at Hudson for five years, or three months on the hill your honor,” was the response that electrified the court.  The judge sentenced her to jail to await trial at the special sessions.

Records from the orphanage list Ellen Layton’s residence as the Hudson River State Hospital (Insane Asylum) where she was confined for an undetermined time.  She does not resurface in any records and likely died there.   Thomas Layton was admitted into the almshouse on November 8, 1893 and died three years later.   He is buried in a single grave in St. Agnes Cemetery.

Imagine the turmoil Eva, Ellen and little Jessie endured throughout their childhood.  They were neglected by their promiscuous, alcoholic mother who was committed to an insane asylum, and then forced into an orphanage because their father was blind and crippled and unable to support them.  Ellen was released from the orphanage and into the workforce upon her 18th birthday.  Jessie was discharged to Sister M. Gabriel of Buffalo.  Eva, the girl who almost died on the grounds of St. Agnes Cemetery, left  St. Joseph’s Industrial School in 1905 and disappeared.  She left no trace of her adult life.  I found what may be a death certificate for Eva Layton dated October 25, 1956 from Binghamton, NY and ordered it but I cannot at this time be sure it is the Eva until I see who is listed as her parents.

Are there any super sleuths out there willing to do a little research to find if any of the Layton sisters have descendants?   It would be wonderful to find descendants that have a better life than did their great grandmothers/aunts.

Contact me via email [email protected] or call me if you are interested in doing some research”.

Eva and her three friends are featured in our beautiful 160 page coffee table book “These Sacred Grounds: 150 Years of St. Agnes Cemetery” by Historian and Author Kelly Grimaldi, and is now on sale for only $35.  Click here for book information.