Old cemeteries are not everyone’s cup of tea.  Then there are people like me that find old cemeteries to be fascinating places warranting a visit whenever one is in sight.  Cemetery enthusiasts are kindred spirits.  We truly understand each other’s desire to hang out for hours reading gravestones that are centuries old.  Once you catch the “Old Cemeteries Bug,” you can’t go back to being indifferent towards them.

Gail Welter, author of the blog “Life As I See It”, our featured writer for this month’s Stories of our Dearly Departed series, tells us how she caught the bug.  In this beautifully written piece, Gail takes us on her journey to becoming a diehard cemetery enthusiast.   St. Agnes Cemetery, Menands, especially impacted her attitude towards old burial sites so much so that she and her husband John funded the restoration of an entire grave lot located on Founders Hill in St. Agnes Cemetery. Her words and her accompanying photography are wonderful and beautiful.  We are very grateful for the opportunity to present her piece for our readers to enjoy. – Kelly Grimaldi

“Some people find great solace in visiting the cemeteries where their loved ones are laid to rest. I was never one of those people.

For most of my life, I’ve felt a sort of disconnect when it came to visiting gravesites.  Maybe it had to do with my Christian upbringing, believing that my loved ones were not really below the ground but rather in heaven in the company of God and their already deceased loved ones.  For me, I found solace in looking at photos, reliving times gone by, sharing stories of their lives with family….all things that in my mind would serve to keep their memory alive.  As far as I was concerned, cemeteries served to store the skeletal remains of people, including people I loved and lost, but those people, their souls, were no longer there.  They were in heaven.  I didn’t need to visit the box that held their remains to remember them or honor them.  I did visit them but without the emotional tug that so many feel when visiting graves.  It was more a matter of paying respects.

Because of that disconnect, I didn’t want to be ‘in’ a cemetery, imprisoned for all eternity beyond a time when there’d be any relatives left to know where I was, or care where I was for that matter.  I thought, ‘Why take up space in the cemetery when someday no one will even know who I am if they happen to read my gravestone’?  Well my thoughts about cemeteries changed recently when I began researching our genealogy and we discovered John’s third great grandfather, Captain Michael O’Sullivan.  Michael’s story was so fascinating that I shared it [in my] blog, Finding a Hero in our Family Tree.  In our research, we discovered that Captain O’Sullivan is buried in Menands in the St. Agnes Cemetery and the folks in the cemetery office were able to locate and direct us to Michael’s grave.

Although both of us were born and raised in the Capital District, neither of us were familiar with St. Agnes Cemetery so our first visit was a pretty mind-blowing experience. In case you aren’t familiar, let me give you a little cemetery history with the help of Kelly Grimaldi, Historian, Albany Diocesan Cemeteries [and Kelly’s book These Sacred Grounds – Celebrating 150 Years of St. Agnes Cemetery].  In the early 1800’s rural cemeteries hadn’t yet been established.  Church cemeteries were full and there was a need for burial space.  By the early 1830’s municipal cemeteries were also filling up.  A surge of immigrants, many of them Catholic, magnified the shortage of burial space.  In the 1840’s the Albany Rural Cemetery was created through the acquisition of farmland for non-denominational burials but was still a need for a burial space for Catholics.  In 1868 that need was met with the founding of St. Agnes Cemetery, thanks to Peter Cagger, a well respected attorney from Albany.  Peter purchased the original 50 acres of land for the cemetery in 1867 for $20,000.  He immediately resold the land for $1.00 to establish Albany County’s first Catholic rural cemetery.  Landscape architects and engineers transformed the rocky, hilly land into a beautiful cemetery in just 12 months and the cemetery was consecrated on May 19th, 1868.  Cagger was elected the first president of the board of trustees. and trustees were given first choice of grave lots.  Ironically, Cagger was killed in an accident when he was thrown from his buggy in Central Park in NYC  just one month after choosing his final resting place making him one of the cemetery’s very first interments. 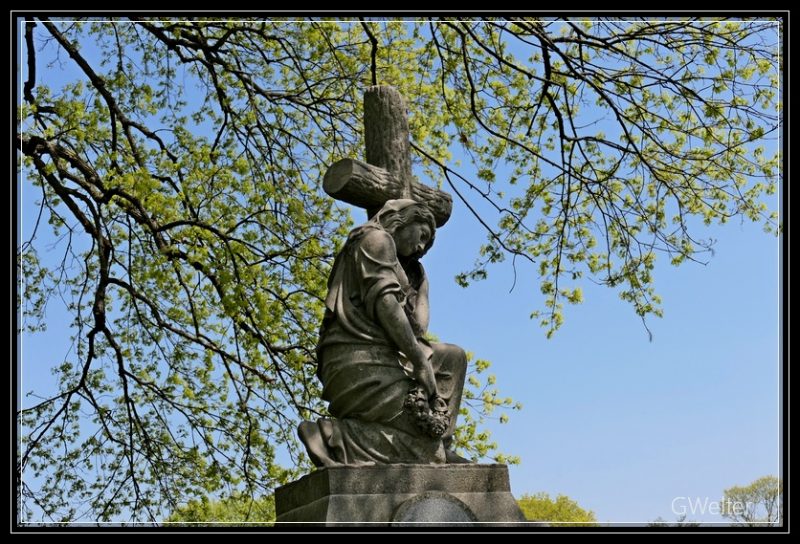 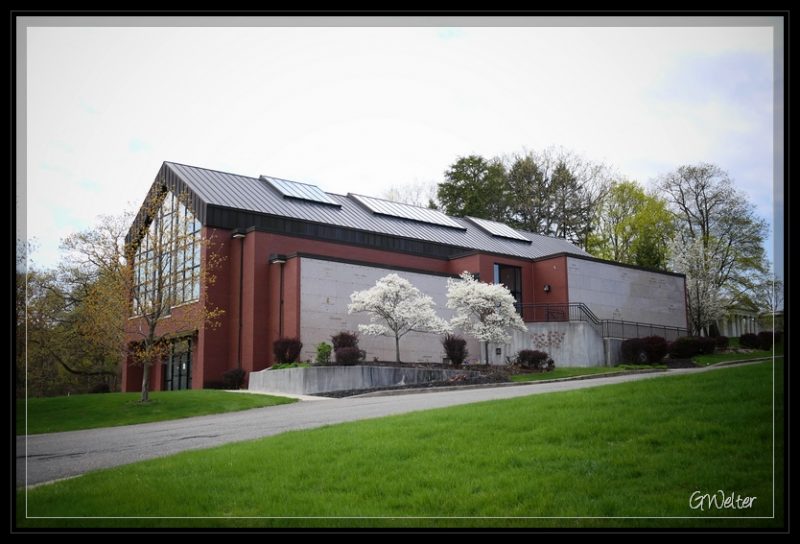 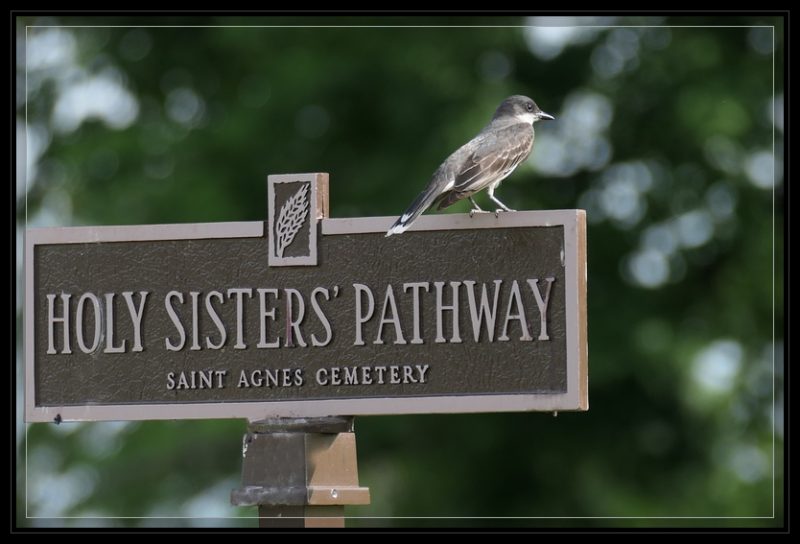 Today the cemetery consists of 107 acres where over 100,000 are buried, including Captain Michael O’Sullivan and his grandson, Michael O’Sullivan (John’s great grandfather) in a separate plot on the other side of the cemetery.  If you read Captain O’Sullivan’s story, you know that in his plot are also buried his wife and their daughters Catherine, Mary and Elizabeth.  Mary’s stone had toppled from its base and was broken.  Catherine’s was stained and the cross on top of it was broken from the base.  Elizabeth’s stone was sitting precariously on its base, ready to topple with very little encouragement.  Despite our prior indifference toward cemeteries, Captain O’Sullivan’s story, his heroism and patriotism as an Irish immigrant who lied about his age in order to fight for his new country in the Civil War, inspired us to have his cemetery plot restored to the dignified condition it was so long ago.

We contacted Kelly and arranged with her to have new bases poured for Mary and Elizabeth’s monuments and to have Mary’s stone repaired.  Once the bases were poured and ready, the two monuments were reset onto the bases.  Kelly repaired Mary’s broken cross monument and cleaned and restored it as best she could since some pieces of the cross were now missing, not surprising since Mary died in 1868. She also repaired the cross on Catherine’s monument and cleaned it too.  Seeing photos of the restoration, one of Captain O’Sullivan’s descendants who happens to be a second great grandson, wanted to contribute towards the restoration and so we arranged for Kelly to clean Elizabeth’s monument as well.   Now the entire O’Sullivan plot is standing tall and proud, as it represents a family whose story has now been retold. Thanks to Ancestry.com, we found some common descendants and our newfound respect and appreciation for burial grounds.  Ironically, Michael’s second great grandson, Walt, who was instrumental in putting together Captain O’Sullivan’s story, grew up 3 houses from John until 1962 but they never knew each other or that they were related!  Talk about coincidence!!

My intention in this post was to share the beauty and awe of St. Agnes Cemetery,  but as I tried to find the words to tell its story, I realized that my intention in sharing is about more than the beautiful grounds and hundreds of magnificent monuments. It’s about the people who lay in rest there whose stories are waiting to be told.”…

Visit Gail’s blog here to read the rest of this story and see more of the beautiful photographs she captured within St. Agnes.