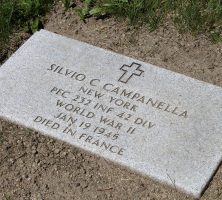 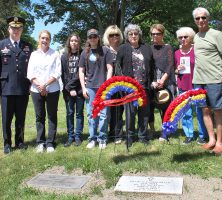 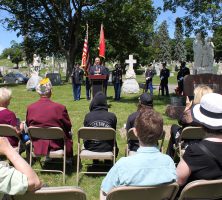 Major Patrick Chaisson- Historian, Rainbow Division Veterans Foundation U.S. Army, Retired tells the story of how Campanella was executed and how the marker was corrected 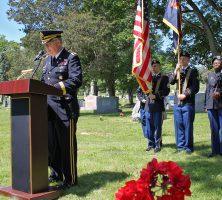 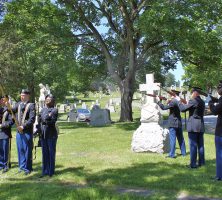 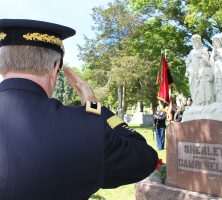 A special Flag Day Ceremony was held on June 14th, 2017 at Historic St. Agnes Cemetery, Menands, NY as Members of Headquarters, 42nd Infantry Rainbow Division arranged for a military detail to provide honors for Private First Class Campanella, a young man who was executed in France on January 19, 1945 under unusual and tragic circumstances along with several of his comrades.  His body was returned home after four years after his death and buried unceremoniously in an improperly marked grave.

Members of the local 42nd Rainbow Division got in touch with the family of this soldier and worked with Historic St. Agnes Cemetery to ensure a proper grave marker was ordered and organized a long over-due honors ceremony.  The ceremony was graveside and attended by many of Campanella’s family members.

Master of Ceremonies Major Patrick J. Chaisson, historian for the Rainbow Division Veterans Foundation provided information on Private First Class Campanella and how the 42nd Infantry Rainbow Division and Historic St. Agnes Cemetery worked to insure a proper memorial and service for this patriot. “What brings us together here is our need to pay a debt of gratitude to an all but forgotten Soldier. We also feel the need to set things right – as right as we can – to honor him”.

“Several of these dead Soldiers were hastily buried by French civilians in the village of Sessenheim. Their remains were later recovered by the U.S. Army, but due to a bureaucratic foul-up these Soldiers’ death certificates were all wrong. The Army recorded the date they were found – January 31st – not the actual day they were killed – January 19th. That’s the simple explanation, but nothing in life is ever this simple. There is a terrible secret to Private Campanella’s death, a truth so horrible that the one person who lived to tell it kept this story inside him for decades,” stated Chaisson.

Video of the story can be seen on our Facebook page:

Here is a link to a wonderful article shared by the NY National Guard on the 2017 Flag Day Ceremony and the story of Army Pfc. Silvio Campanella.