Posted on May 10, 2019 by Jennifer Mele under Most Holy Redeemer Cemetery, Stories of our Dearly Departed
Leave a comment

Albany Diocesan Cemeteries launched “Stories of our Dearly Departed”, a series featuring stories and photographs of those who are buried within our 19 upstate NY cemeteries.

Julie Mountain contacted us recently and sent the following fascinating information about her relatives Frank and Rose Mountain who are both interred at Most Holy Redeemer Cemetery in Niskayuna. 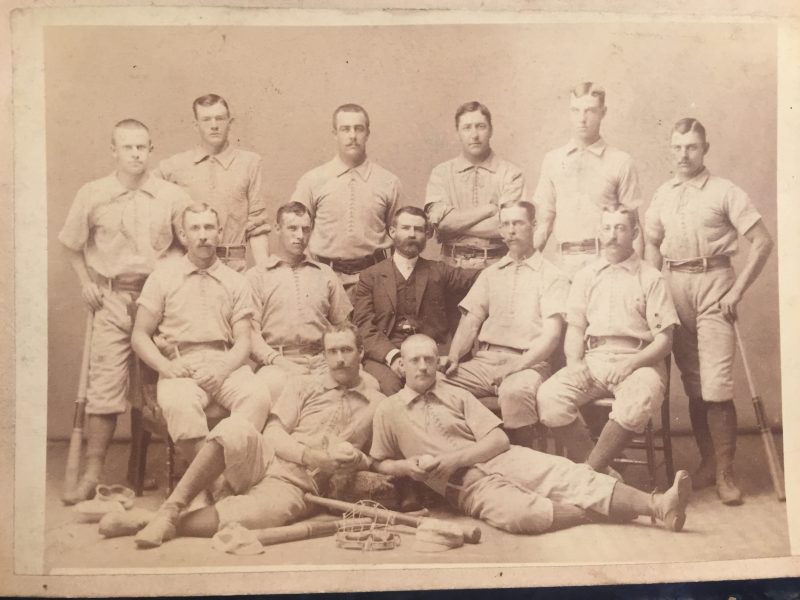 “This team photo is from the late 1800s and I believe the team is the Columbus Buckeyes.  He is in the front row – seated on the left (he has a mustache).

Frank’s daughter – my Great Aunt, is Rose Mountain.  She, like Frank, also had a beautiful voice.  While Frank sang tenor in the choir at St. John the Evangelist, she took her skills to the next level and became an opera signer, singing at the Metropolitan in NYC.  In attendance was then Governor Franklin Roosevelt.  Rose received a Christmas card from him [pictured below].

Frank and Rose are both interred at Most Holy Redeemer. 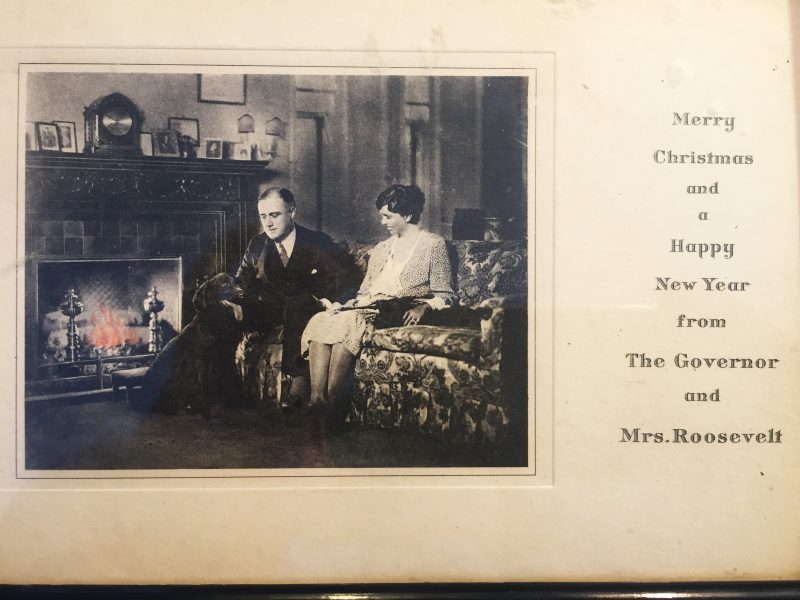 The following story appeared in the Union College Alumni magazine.  Union expressed interest in the story due to its historical significance as nothing captures the imagination like Old Union and baseball!”

Mountain on the Mound

Her great-grandfather played in the pre-modern era of baseball, which produced few stars whose names are familiar to us now, and was widely regarded as one of the best players of the late 19th century. On his first day in the majors, pitching for Detroit in New York City’s Polo Grounds in 1881, he won both games in a double header. In the 1883 season –well before the days of the five-man rotation and a stable of relievers – he pitched 57 complete games (four of them shutouts) and played another 12 in the outfield. On June 5, 1884, Mountain threw a no-hitter (if not for the one walk he issued, it would have been a perfect game, the rarest of pitching feats). For good measure, he hit the only home run in the game.
Then there are Curly’s unique contributions to the game’s development. He was the first pitcher to use a toe-plate. The first player to coach a pitcher from the bench. He is one of several players credited with discovering the spitball.

And it all started at Union College. Born in Fort Edward, NY, in 1860, Curly’s family moved to Schenectady when he was five. His love of the game and his exceptional skill led him almost intuitively to the Union campus, where, in the days when such things were allowed, he played on the college team even though he was still a local high schooler. He matriculated in 1879 and was the second baseman on the Union team of 1880, which won New York State college championship.

On campus, Mountain found the intersection of academics and athletics. He worked with Union’s Professor Cady Staley to set up tests to prove that the curve ball – at the time, widely considered an optical illusion – was a real physical phenomenon. In one test, Staley’s physics class placed stakes along a section of the Nott Memorial and had Mountain throw a curve that followed their path. In another test, according to Reverend W.N.P Dailey, writing in The St. Johnsville Enterprise, Curly “placed his teacher so that unless he moved suddenly in the straight pitch the curved ball at the plate would have hit him.”

Curly, who played professionally while still a student, pitched in an era with significant differences to today’s game. Foul balls did not count as strikes, the pitcher was closer to the plate, and it took eight balls to draw a walk. Gloves were optional. All that wear and tear took a toll on his arm, and his career ended in 1887. He returned to Schenectady and spent almost 40 years at General Electric as an assistant fire chief, singing tenor in St. John the Evangelist’s choir for over 25 years. And he was a regular in the Central Park bleachers, cheering on local teams. While he may have been forgotten by fans, he was still revered by players, and in 1937 the National and American Leagues presented him with a lifetime pass to all major league baseball parks “in appreciation of long and meritorious service.”

Now Julie Mountain would like to see him in the Baseball Hall of Fame. She’s been collecting stats and data from her great-grandfather’s career to support his candidacy for the Buck O’Neil Lifetime Achievement Award – a long-shot goal, but one she is pursuing with passion. “He really made some significant contributions to the game,” she says with pride. “He deserves to be remembered.”