Posted on July 8, 2019 by Jennifer Mele under Stories of our Dearly Departed
Leave a comment

June Kosier recently sent in the following information and photos of her grandfather who worked at The Record newspaper in Troy for over 60 years! “Grandpa Pat” is interred at St. Joseph’s Cemetery in Waterford.

“Pat Hartnett was born on February 7, 1896 in Troy.  His parents were Thomas J. Hartnett and Mary (Molly) Coonan Hartnett.  He had a brother named Thomas and a sister named Margaret also known as Marie. 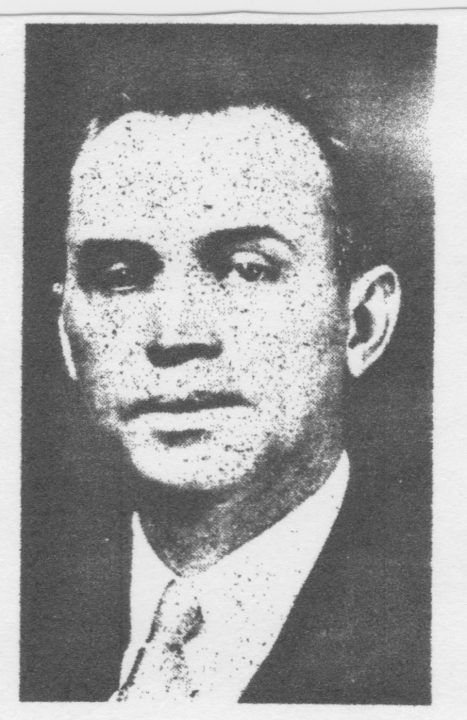 Pat began working at The Record (newspaper) [in Troy] during the summer of 1911 while still attending School 12. His father had died and he went to work to help support the family. Pat had a morning paper route picking up papers at The Record offices at 5 AM and then went to school after completing his route.  After school, he peddled bundles of the evening issue by throwing them off a trolley car to other boys to deliver in south Troy.  After going home to eat supper, he would return to the Record building and work in the editorial department from 6-10 PM answering telephones and running errands.

In 1912, Pat switched to the composing room during the day. He approved galleys for two years and began an apprenticeship in May of 1914.   He became a journeyman printer in 1918. In May of that year he went into the Navy and served in troop convoy for eleven months during WW1. 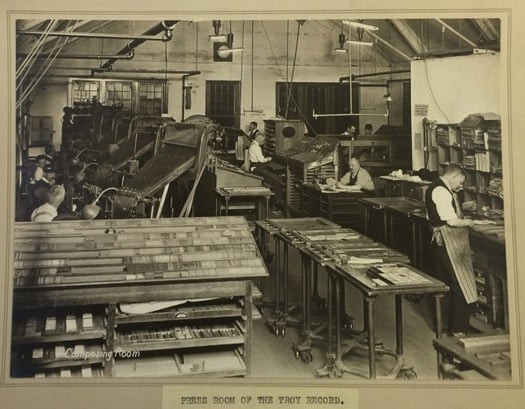 The press room at The Record, circa WWI

[When creating the blog post for this story, we found this image online of the press room of The Record. Maybe Pat is pictured in the photo?]

Pat retired from the Record on January 25th, 1973 after working more than 60 years there.  It is said that he always had a dictionary by his side as he set classified advertisements.

Pat married Laura Dannis, lived on Spring Avenue [in Troy] and was a communicant of Sacred Heart Church on Pawling Avenue for many years.  They had two sons, Thomas and Gerald and a daughter, Elizabeth, better known as Betty (Hannay). After retirement, Pat moved to Schenectady to be close to his son, Thomas.  He died on September 12, 1986 and is buried in St. Joseph’s Cemetery in Waterford.”

“Stories of our Dearly Departed” is a series that is highlighted from time to time on Albany Diocesan Cemeteries’ Blog, Facebook page and in our newsletters. We hope you enjoy the stories and research brought to light on those who are buried within our 18 cemeteries.