Posted on January 15, 2020 by Jennifer Mele under Stories of our Dearly Departed
Leave a comment

In 2019, Albany Diocesan Cemeteries launched “Stories of our Dearly Departed”, a series featuring stories and photographs of those who are buried within our 19 upstate NY cemeteries.

Andrea Kelly recently submitted the following story “Memories of a Cohoes Resident” and photo to share about her relative John O’Leary who is interred in St. Agnes Cemetery, Cohoes, NY.

“It seems that stories passed down in families tend to have some truth to them. Several years ago I volunteered to give a co-worker a ride home. We got talking about where we grew up and went to school. It turned out that she had graduated with my sister. I asked her maiden name and she told me it was O’Leary. I said that was my mother-in-law’s maiden name. She said well, her family was from Cohoes. I said so was my mother-in-law’s! She said her great grandfather was an inventor of the helicopter but he never got credit for it. I said that’s the same story from my husband’s family! So we found out that she and my husband were second cousins but had never met. The inventor was John O’Leary.

Since that time my husband has done a lot of research and has copies of all of the patents, which he was able to get at the NYS Library.

John O’Leary was one of 10 children of Irish immigrants, Lawrence O’Leary and Anna Lynch. His father was a stone mason and was naturalized in Little Falls in 1860. The family moved frequently, wherever the demand for a mason would take them. John was born in 1855 in Ballston Spa. By 1864 they were in Cohoes.

John married Anna Norris in 1874. They lived at 205 Congress Street (not far from railroad tracks) and had 11 children. John was a contract painter and had a paint store on Remsen Street. Four of his five sons would become painters with him. His great-grandson, my brother-in-law, also became a painter. There is a photo of John with his sons painting a beautiful home at 125 Ontario Street at the turn of the century.

John was a member of the Holy Names Society of St. Bernard’s Church as well as the Chamber of Commerce. In his spare time he was also a well -known inventor. He held 11 patents. Many had to do with safety features pertaining to vehicles for transportation. One was what we call a “cow catcher” but was really called a car fender (not what we think of as a fender). It was a safety feature for the front of a trolley car or automobile which scooped pedestrians out of harm’s way. Both were designed to prevent pedestrians from being run over. 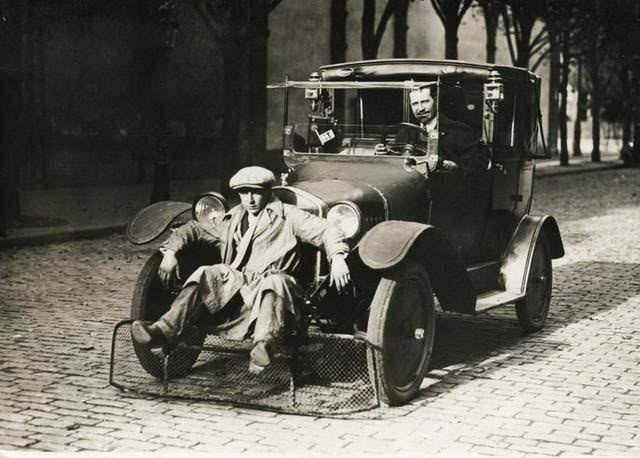 He also invented a convertible trolley car which allowed the windows to roll up into the roof during warm weather and pulled down for inclement weather. This eliminated the need to store the windows in a separate location when not in use.

The last invention, which is mentioned in his obituary was the “Orthopter”, what we know as a helicopter. He had submitted his patent but died in 1918 before he was credited with it. He is buried at St. Agnes Cemetery in Cohoes with other family members. His wife Anna moved to Schenectady to live with her son Lawrence, my husband’s grandfather.”