Last fall I read with great interest an article about the Kane-O’Donnell House History written by Sand Lake Historian Bob Moore and published in The Advertiser newspaper.  My interest stemmed from the fact that Nicholas Kane, an owner of the house in the 19th century, is buried in St. Agnes Cemetery, Menands.  His memorial is enormous and is the only one in the cemetery to feature a bronze bust centered on the monuments columned pedestal.  It is a striking memorial to an accomplished man that died too soon.  Bob was gracious enough to put me in touch with Mary Eileen O’Donnell.  I was thrilled to get an account of her ancestors life from her.  Here is what she had to say:

Mary Eileen O’Donnell wrote and submitted the following about her relative interred in St. Agnes Cemetery, Menands to share with us all:

This cousin had a clearer picture of Nicholas Kane. Based on what my cousin said, I then did some research on milling in Rhode Island and then the Capital District, NY, especially Cohoes.

There is a very informative Wikipedia article:  https://en.wikipedia.org/wiki/Nicholas_T._Kane.  It has excellent information about Nicholas Kane.

We believe he was not a rags to riches story.  They were what you’d call “lace curtain” Irish.

We think the Kanes probably had milling experience back in Ireland. Cotton and woolen mills were common in Ireland.

The Kanes didn’t come straight to the Albany/Troy area.  They sailed from Cork to Newport, Rhode Island and they didn’t come in a “coffin ship.”  We think they paid for their passage and traveled comfortably, or as comfortably as they could in the 1840s.  NOT in steerage. I do know that they lost a baby during the journey and the baby was buried at sea.  So, Nicholas Kane lost a baby brother or sister in that ocean voyage.

In Rhode Island, the Newport area, we think that they probably got involved in some milling there.  There were many mills in Rhode Island at that time. But they didn’t stay there long.  They moved to the Capital District, living in Watervliet for quite a while.

Industries were very attracted to Cohoes – the whole Albany, Troy, NY area. There was the sheer power of the rivers – the Mohawk and the Hudson converging to create massive water power driving the new mills in the area.  Cohoes became famous for its textiles industry.

The Kanes were definitely living there by the 1860s because Nicholas Kane enlisted in the Union Army at the age of 16 from that area. Perhaps he was already working in the mills and army life seemed more exciting.  I don’t know. But 16 was young for a soldier. Based on what unit he was in, I think Nicholas Kane might have been at Appomattox Courthouse on April 9, 1865 when the war ended.

So, after the war, Nicholas went back to milling, eventually becoming a supervisor and owner in the Watervliet area and later out in Averill Park.  The mill he owned became known as Faith Mills in later years on Burden Lake Road.  That’s where N.T. Kane bought the gorgeous Second Empire Victorian mansion with the Mansard roofs on upper Burden Lake Road which became known as the Kane Mansion, or the Kane residence. Later it was just called the O’Donnell house. Only Kanes and O’Donnells ever lived in that house for 115 years.

We sold the house in 1991 and the house was purchased again in 2021 by a gentleman in New York who will refurbish it and turn it into a B&B.  Let me tell you, I’d stay there!  It’s gorgeous!

There is a deconsecrated church in Watervliet called St Bridget’s.  It’s a beautiful little church and now it’s a little open-floor factory.  Printing T-shirts if I recall from my visit a few years ago. The factory owners [may] let you go in there and walk around the old church/now factory if you tell them why you’re there.

The stained-glass windows are all still in place and beautiful and some are dedicated to the Kanes.  One in particular I remember is dedicated to Nicholas Kane’s brother who died in the Civil War – maybe James Kane? – I can’t remember his name right now. I think the window says he’s buried down in Louisiana someplace – near Baton Rouge or New Orleans.  Bodies didn’t “make it home” during the Civil War.

I hope this was helpful, Kelly.

I’m so glad you are interested in this person in my family and his final resting place.  He was very respected by his community.  A ‘big deal’ as we’d say now.

Thank you and much love.“

NOTE:
If you have a copy of our beautiful 160 page coffee table book “These Sacred Grounds: 150 Years of St. Agnes Cemetery” by Historian and Author Kelly Grimaldi, you can read more about Mr. Kane on page 108. 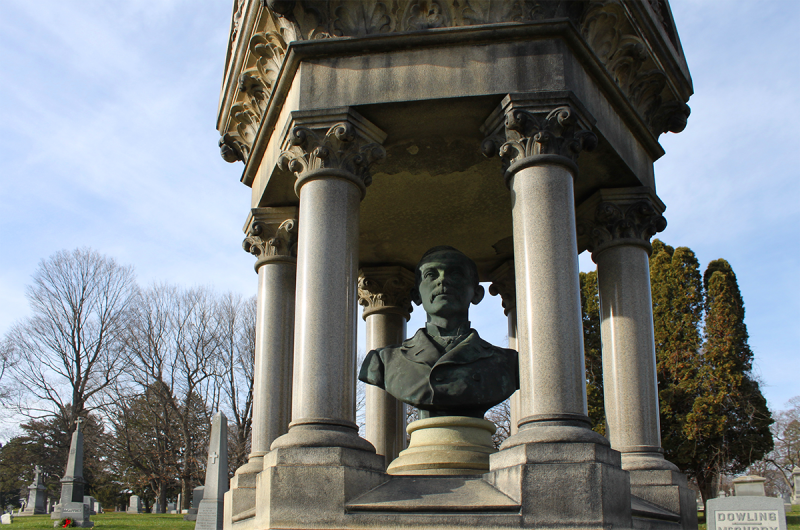