Posted on July 5, 2022 by Jennifer Mele under Stories of our Dearly Departed
Leave a comment

It is said that God does not give us more than we can bear and that faith in him will bring strength to believers.  But sometimes it seems that certain people must endure more than their fair share of heartache and I wonder just how it is they persevere under the weight of profound grief.

Rita Benoit Ridgeway would have many opportunities to lean heavily on her faith in God.  In 1955 her only son, Paul Kenneth Ridgeway, a member of the United States Air force on active duty in Tooele, Utah, was involved in a two-car crash that killed him and two drunk drivers in another vehicle.  Paul was only 20 years old when he succumbed to head injuries three days after the accident.  His mom and her sister flew out to Utah and sat by his bedside until he died and then accompanied his body back home to Green Island. Rita’s anguish for having to bury her only child took her smile away for the rest of her life. Rita had no idea that fourteen years later her own life would end as the result of a tragic accident.  Here is a transcription found in the Troy Record dated February 27, 1969:

“A Green Island woman was listed in critical condition today at St. Mary’s Hospital with burns suffered while preparing dinner in her home.  According to police, Mrs. Rita Ridgeway was preparing hot dogs at her gas range when the housecoat she was wearing caught fire.  Clarence, a boarder in Rita’s house, called the police and an ambulance.  When they arrived, they found Mrs. Ridgeway partially submerged in the bathtub.  She had suffered third degree burns to 60 percent of her body.”

I can tell you the rest of the story from what I was told by my mother years ago.  Rita Benoit Ridgeway was my mother’s father’s youngest sister.  Mom knew her well.  Aunt Rita’s death was slow and painful.  Her “housecoat” was a nylon robe that predated the Flammable Fabrics Act of 1953 which brought about a change in how clothing was manufactured and sold commercially.   It caught on fire around her mid-section and, in Rita’s own words, “the robe melted to body in seconds.”   The results were devastating.  Rita’s skin melded with the charred nylon and there was nothing doctors could do but try and ease her pain.

She lay in Albany Memorial Hospital on a mattress filled with cool water.  Her moans were audible from down the hospital corridor outside her room as my mom recalls her mother telling her.  The pain of even a small burn is intense.  It is hard to think about what Rita endured at the age of 59 years old.  In and out of consciousness, her body wracked in pain, she begged to die.  The angel of death mercifully took her to heaven on March 8, 1969.  I hope her reunion with her son was joyful. 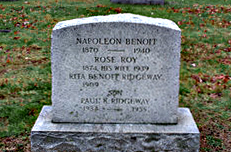 Both Rita and Paul rest in peace in St. Joseph’s Cemetery, Waterford, NY.    This cemetery is considered the “French” cemetery because most people interred in these sacred grounds are of French origin or descent.  Rita was the child of Napoleon and Rose Benoit – both first generation Americans.  Their parents were citizens of Canada having descended from citizens of France.  There were many reasons why French people immigrated to Canada and America from France.  As is usual, waves of French immigrants to the United States was because of economic, religious, or political factors.   The Benoits came seeking work and a better future.   They assimilated into American society so well their descendants have no direct experience with French traditions.  When in America, do as the Americans do; seemed to be a common way of thinking.  I can’t help but think it would have made for a more interesting world if immigrants passed on their language and culture of origin while simultaneously assimilating in their adopted country.   If each new generation did that, we would have a greater knowledge of the world at large.  In my case I would be speaking French, German, Italian and Gaelic representing my ancestral heritage.   Imagine that!