The Brolley Angel in St. Agnes Cemetery- Who Were The Brolleys?

A few years ago, Albany Diocesan Cemeteries launched “Stories of our Dearly Departed”, a series featuring stories and photographs of those who are buried within our 20 upstate NY cemeteries.

I gave the Brolley angel its first D2 Biological Solution treatment in late fall of 2019 and then a second one in the first week of March, 2020.  The marble figure is beautifully carved and sits on a large granite stone with the only inscription reading “Brolley.”   The monument appears to have been neglected for a long time.  One urn was broken and the monument was heavily covered with lichen and black stains.   There are two simple granite markers for Alfred 1848 – 1930, and Josephine McGraw (his wife), 1851 – 1933. 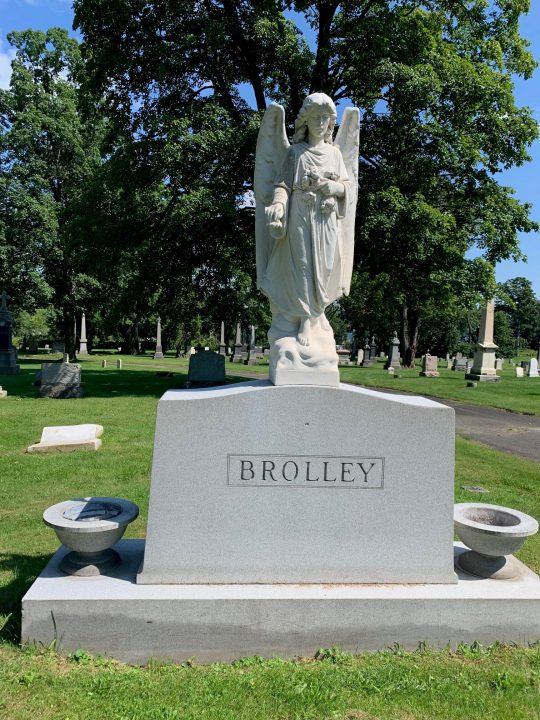 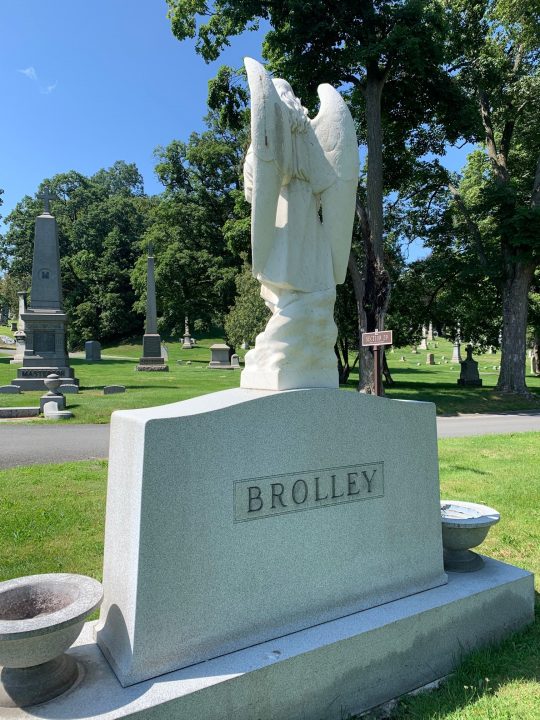 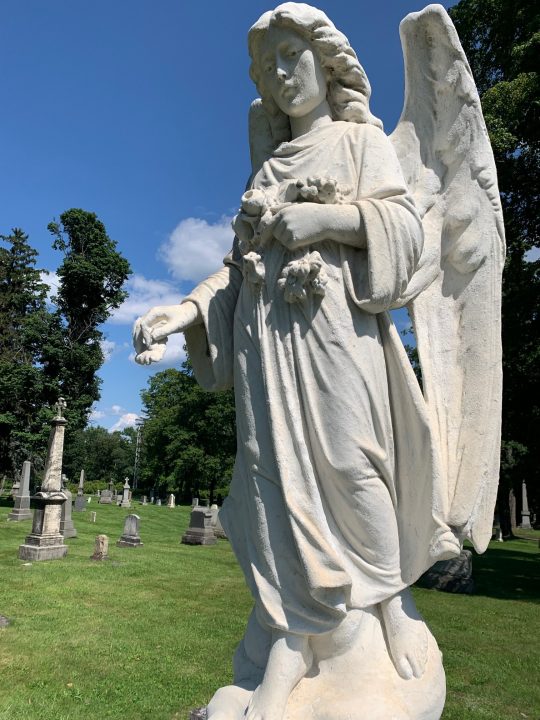 Memorials to the dead always have a story behind them and as I sprayed down the Brolley angel, I thought about theirs.  Who were the Brolleys?  We have some information on Alfred but as can be expected, little is said about his wife.  His obituary sums up his life.  It was a well lived life with connections in the political and business arena.  That explains the grand monument for the Brolleys in St. Agnes Cemetery, Menands.  His obituary is transcribed verbatim here:

“Alfred S. Brolley, an attache of the Court of Appeals in Albany for 41 years, died yesterday at his residence on Delaware Avenue, Albany, after an illness of more than three months. He was 82 years old. The career of Mr. Brolley, which began more than 60 years ago in the Albany Police Department, reads like fiction. He rose quickly to a detective soon after his entry in the department, but not long after met with ill fortune that would have broken an ordinary man. But Mr. Brolley started anew, rebuilding his career and carrying himself to the office of consulting clerk to the court of appeals. He was the late Chief Justice Alton B. Parker’s closest confidant when the 1ater ran for president on the democratic ticket in 1904. Mr. Brolley retired from the Court of Appeals eight years ago and went to Los Angeles, California where he lived for five years, before returning to Albany. He is survived by his wife and an adopted daughter.”

We are blessed in this day and age to have a lot of information about people from history.  All it takes is a little research and there it is – their lives pieced before us.   I’m always drawn to the smaller details.  I find them more interesting.  In regard to the Brolleys, what I am really hoping to find is someone out there who knows the story of their adopted daughter, Alice J. Coons Brolley.  She is listed in the 1905 state census as Alfred and Josephine’s stepdaughter.  Alice is 12 years old in 1905.  By the 1910 census she is 17 years old and now goes by the name Alice Brolley.  She is definitely a young lady of privilege.  Alice goes on the grand tour of Europe in 1908 and is found visiting well-to-do families all over the northeast and mid-Atlantic states throughout her teens.  In 1913 we find Alice mentioned in the society page of the Washington Post attending the wedding as the maid of honor to Amanda Hurley.  It was no small affair as detailed in the newspaper column dated March 30, 1913.

There is a marriage record for Alice J. Brolley and William D. Haggerty dated June 26, 1920 but subsequent research finds her with Kenneth Haggerty, a man five years her junior.  They have two sons, Frederick and Malchen.   I can’t be sure this is the same Alice.  Ah the inaccuracies of vital statistics from the past!  I left my research there for the time being.  Is anyone related to Alice J. Coons Brolley Haggerty?  We would love to hear from you.  How did Alice end up being adopted by the wealthy, well-connected Alfred and Josephine (McGraw) Brolley who were otherwise childless?   There are many questions to be answered.

Incidentally, the Brolley angel responded well to the D2 Biological Solution treatment without any scrubbing.   She is pictured here in all her glory!