The Mystery of Henry Dunphy

In January, Albany Diocesan Cemeteries launched “Stories of our Dearly Departed”, a series featuring stories and photographs of those who are buried within our 18 upstate NY cemeteries.

The first stories were researched and written by our Historian Kelly Grimaldi, but The Mystery of Henry Dunphy is the first story (hopefully of many) we are thrilled to share from a community member! Andrea Kelly contacted us in March and sent us the following story of her long-lost ancestor.

“My great grandmother, MaryLouise “Minnie” Dunphy, daughter of Edmond and Mary, came to New York from Kill (meaning church in Gaelic), County Waterford Ireland in 1893. She had a brother Henry and four sisters who followed later. One brother and one sister remained in Ireland. Minnie married Fred Leary and they lived in Sandy Hill (Hudson Falls). Her sisters stayed in the NYC area.

In 1992 descendants of two of her sisters organized a Dunphy reunion at one of their homes in northern New Jersey. There was a big turnout, and everyone brought photos. A big bulletin board was put up for us to add our photos under the corresponding immigrant sister. A note had been made under Henry’s name that he died in Albany 1895 in an accident during a snow storm. The story was that the other brother and sister were not allowed to leave Ireland because of Henry’s death.

Since 1992 I have searched for proof of that note. I could not find any record, death certificate, census or anything else. All these years, especially after we had online sources I have searched Henry’s name sporadically. 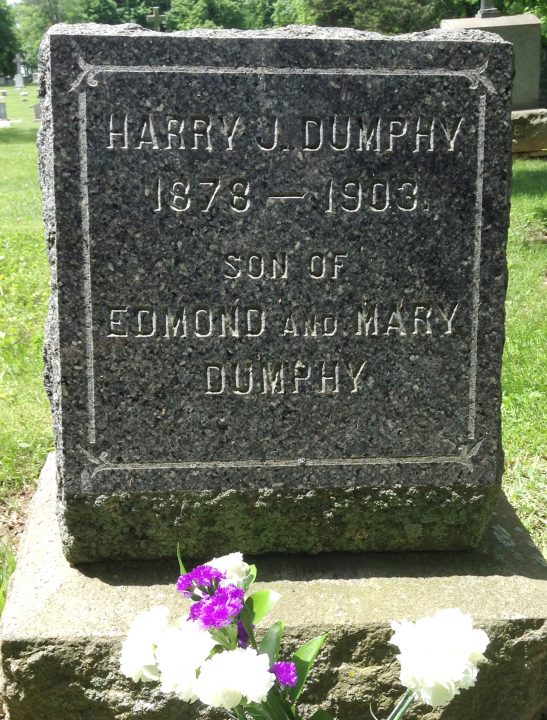 This summer I finally solved the mystery. I just happened to enter Henry’s name as I often did in ancestry and a find a grave record popped up. The name was Harry Dumphy Jan 1903 age 26 at St. Agnes Cemetery. I thought I would look into it because of the young age, location and time of year.

I sent an email to the cemetery to find out what I could. They answered the next day: Henry J Dunphy is buried in a single grave (not a family lot) in section 5 lot 2 Range C.  His death is listed as accidental – January 27, 1903 age 26 years.   Place of death is Karner.  Place of birth is Albany.  No other information is offered on the burial card.

So I went to the Colonie Town Clerk the next day. They were so helpful and accommodating. I had the death record within an hour. Again the name was Henry Dumphy. The parents listed were Edward and Mary Dumphy. Country of birth: Ireland. Cause of death: due to RR accident. I was thrilled but I always want more proof. I called the cemetery again and asked who paid for the plot. It was Minnie Leary, my great-grandmother. 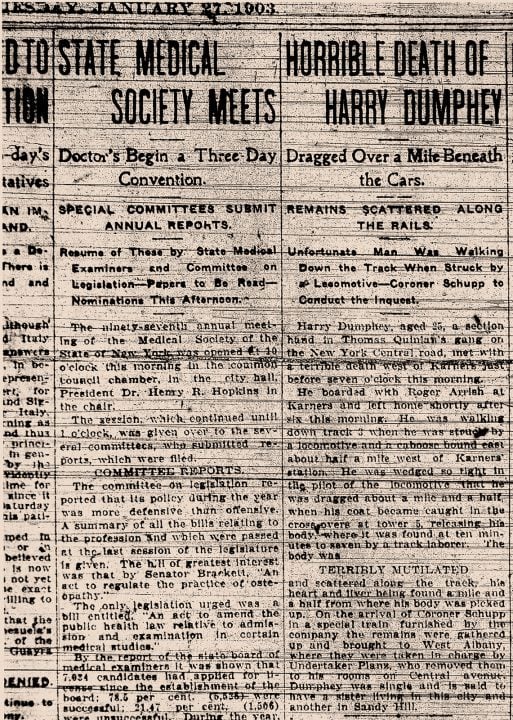 I had searched Fultonsearch.org several times over the years to no avail. Now that I had a date I searched by browsing the newspaper. I found a front page story (pictured here and transcribed below) in the Albany Times Union that told all about the horrific death of poor “Harry Dumphey”.

(Transcribed verbatim from an article published in the Albany Times Union on January 27, 1903)

Dragged Over a Mile Beneath the Cars.

Remains Scattered Along the Rails.

Unfortunate Man Was Walking Down the Track When Struck by a Locomotive – Coroner Schupp to Conduct the Inquest.

Harry Dumphy, aged 25, a section hand in Thomas Quinian’s gang on the New York Central road, met with a terrible death west of Karners just before seven o’clock this morning.

He boarded with Roger Arrish at Karners and left home shortly after six this morning.  He was walking down track 3 when he was struck by a locomotive and a caboose bound east about a half a mile west of Karners ‘ station.  He was wedged so tight in the pilot of the locomotive that he was dragged about a mile and a half when his coat became caught in the cross overs at tower 5, releasing his body where it was found at ten minutes to seven by a track laborer.  The body was

and scattered along the track, his heart and liver being found a mile and a half from where his body was picked up.  On the arrival of Coroner Schupp in a special train furnished by the company the remains were gathered up and brought to West Albany, where they were taken in charge by Undertaker Planz, who removed them to his rooms on Central Avenue.  Dumphey was single and is said to have a sister living in this city and another in Sandy Hill.

One more time I called the cemetery to get directions to the plot. They sent me a map and told me there was probably not a stone because the area he was in was single plots that usually didn’t have a marker. My sister, my niece and my great nephew wanted to go with me to the cemetery that weekend. We found the plot easily and were shocked to see there was a beautiful headstone that was in excellent condition. We left flowers and took pictures (photo above).

It took 26 years but I found the whole story. I shared everything with relatives here as well as in Ireland and England (the descendants of Minnie’s other siblings). Everyone knew about Henry but now we knew the rest of the story!”

“Stories of our Dearly Departed” is a series that is highlighted from time to time on Albany Diocesan Cemeteries’ Blog, Facebook page and in our newsletters. We hope you enjoy the stories and research brought to light on those who are buried within our 18 cemeteries.

5 thoughts on “The Mystery of Henry Dunphy”