Posted on November 10, 2019 by Jennifer Mele under Stories of our Dearly Departed, Veterans and Military
Leave a comment

In 1863, the body of 22-year-old Civil War soldier Private James (Jimmy) Claffey was loaded into a box car in Louisiana on a train heading north to Albany, New York.  While young Jimmy escaped having bullets tear through his body in battle, he, like the majority of the 177th Infantry of the New York State Volunteer Army in which he served, could not avoid contracting “Swamp Fever” – an insidious disease transmitted by mosquitoes.  The area of Louisiana where the 177th was stationed was mostly comprised of marshland and brackish water.  Mosquitos thickened the humid air and fed upon the blood of both man and beast causing both to sicken and often die a terrible, choking death.  Already weakened by the long march south and poor nutrition, Jimmy’s once strong, young body surrendered to death on September 10, 1863.  His remains like 40,000 other soldiers,  were embalmed in response to a public outcry for fallen soldiers of the Civil War to be returned to the families for burial. Prior to this new method of preserving human bodies, thousands of slain heroes were relegated to burial in hastily dug, shallow graves in lands far from their home and families. This left families with no closure and no peace.  It took approximately six weeks after his death for Jimmy’s body to arrive in Albany where he was buried in St. Mary’s Cemetery, Albany.  It would not be his final resting place.  St. Mary’s Cemetery began closing in 1875 and bodies buried there were moved to St. Agnes Cemetery, Menands.  Jimmy’s final resting place is on a hillside in section two with 82 veterans of the Civil War. 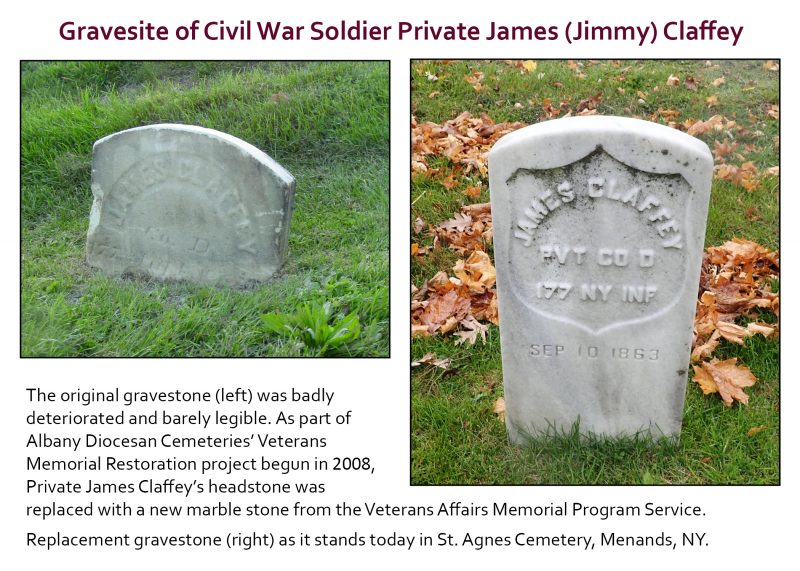 In all, over 1,200 veterans’ headstones have been restored or replaced over the past 11 years throughout many cemeteries under Albany Diocesan Cemeteries management.  We make a promise as a nation to never forget those who served our country in times of war and in times of peace. No veteran should rest in an unmarked or poorly memorialized grave. Our quest to ensure all our departed veterans are properly memorialized continues.  If you know of a veteran that rests in an unmarked or poorly marked grave, please tell us!

For Veterans Day please take the time to visit the grave of a military service man or woman and say a prayer of gratitude for their service.

Albany Diocesan Cemeteries takes our commitment to uphold and honor our veterans service to heart and hold true to that promise by doing what we can to restore as many of the memorials of our long deceased veterans as the project will allow. We are fortunate to have great community partners in these efforts including our dedicated staff, volunteers, and donors.