Posted on April 19, 2021 by Jennifer Mele under Stories of our Dearly Departed, Uncategorized, Veterans and Military
Leave a comment

Kelly Durocher researched, wrote and submitted the following story to share with us all.

“When my father passed away in 2015, my mother mentioned a name I had not heard of before, George Gunn. I had never heard my father talk about George before. I discovered that George and my father both lived on Davis Terrace in Schenectady, New York, as children, and both their fathers had been in the Navy during World War 2. George had died during the Vietnam War when he was only 18 years old. My mother said my father had fond memories of George and always kept his picture. Also, my mother spoke of the memorials George’s mom would put in the newspaper on special anniversaries.

I felt I needed to get to know George because of my father. I started doing a lot of research and found out George is buried in Most Holy Redeemer Cemetery in Niskayuna, NY. George is buried next to his mother and father, David John Gunn and Angeline E. Ippoliti Gunn. George was born on May 13, 1949. He always resided in Schenectady, New York. George began his tour in Vietnam on August 12, 1967. He had the rank of Private First Class. His military occupation was Light Weapons Infantry. He was attached to the 173rd Airborne Brigade, 1st Battalion, 503rd Infantry, D company. George died of metal fragment wounds while he was engaged in the Battle for Dak To. He was declared dead on November 11, 1967, only three months after his tour began.

“A man is only missing if he is forgotten.”

One day as I was walking through Saints Cyril and Method Cemetery to visit my Grandmother, I came upon a plaque that said, Martin Joseph Cribbs. After reading it, I realized he had died in the Vietnam war also. I stood there and thought to myself, George was not the only one. I’m convinced George had me find that plaque on Memorial Day for a reason.

I went home that day and started a three-year journey to find every Schenectady soldier that died during World War 1, World War 2, Korean War, and Vietnam War. I have two books filled with names, information, and pictures of so many men. Many of the soldiers are buried [within] Albany Diocese Cemeteries in Schenectady. I feel so strongly about not forgetting these men even if they died over a hundred years ago. I found a wonderful quote during my research “A man is only missing if he is forgotten.” 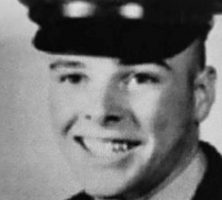 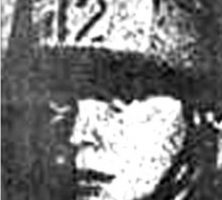 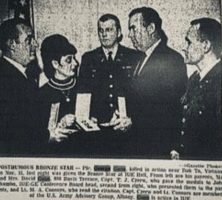 I would like to end my story with George’s own words. He wrote a poem that his parents received a week before he was killed”.

“Look, God, I have never spoken to you

But now I want to say, how do you do

You see, God, they told me you didn’t exist

and like a fool, I believed all of this”.

“Last night from a shell-hole I saw Your sky

I figured right then, they had told me a lie.

Had I taken the time to see the things

you made I’d known they weren’t

calling a spade a spade.

Somehow, I feel that you will understand,

funny…. I had to come to this hellish place

before I had the time to see Your face”.

“Well, I guess there isn’t much more to say

but I’m sure glad, God, I met you today.

I guess the zero hour will soon be here,

but I’m not afraid since I know You’re near”.

I like you lots…. this I want you to know.

Look, now this will be a horrible fight

who knows…. I may come to Your house tonight”.

“Though I wasn’t friendly with you before

I wish I’d known you these many years”.